Generations Health Care Initiatives carries forward the legacy of the Andreas M. Miller Trust. A former Duluth mayor and philanthropist, Andreas Miller was a mining and logging entrepreneur during the late 1800’s and early 1900’s. The underlying purpose of his bequest was to care for the region’s “sick and helpless poor.”

The Andreas Miller Trust originally established Duluth’s Miller Memorial Hospital in 1934, the predecessor to Miller-Dwan Medical Center. After the merger between the SMDC Health System and Miller-Dwan Medical Center in 2001, Generations was formed to carry on the legacy of Andreas Miller. The base of funding was dedicated to implementing innovative strategies to address health needs in Duluth and the surrounding area.

In its formative years, Generations’ primary focus was access to care. Through the early work of the Twin Ports Health Access Coalition, several bold initiatives were undertaken to provide health coverage for the uninsured and under-insured. With the passage of the Affordable Care Act, Generations continues to focus on access to care, but has broadened its work to expanding access to mental health and dental care and improving health status at the community level, with a special emphasis on under-served populations.  In 2021, Generations celebrated it’s 20th anniversary as a private foundation. 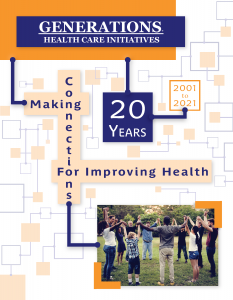